Christian rapper and community activist Travis Tremayne Tyler, also known as, Thi’sl, was the victim of a robbery Monday, Sept 24th that ultimately involved him getting shot multiple times, according to Olivia McClinton, Director of Client Relations of Full Ride Music Group. 41 year old Tyler had to undergo major surgery on his legs, one of which was shattered and now has to be held together with a steel rod. 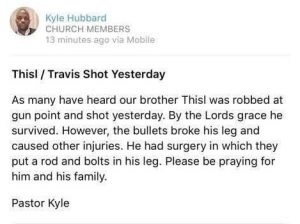 McClinton quoted the Doctor saying that had the bullet went one inch closer to one of the main arteries in his legs Tyler might not have lived. Thi’sl is currently in recovery after his surgeries. His latest social media posts were about events he was involved in near his hometown, where he also mentors and works as an activist.

Once the new broke out, an outpouring of support flooded Tyler’s “Thi’sl” facebook and twitter accounts, with the hashtag #Pray4Thisl. “Our brother may be shattered but he is not broken,” stated McClinton on the GoFundMe account page Thisl’s Journey To Recovery. Thi’sl has grown to be one of the most influential and respected person in the music industry and his community.

Thi’sl is the founder and CEO of Full Ride Music Group, LLC. his latest project released on August 11, 2017, is Levitate.  Born in Greenwood, Mississippi, the ex-gang member, turned music minister new resides in St. Louis, MO, grew up facing the crushing issues of poverty, fatherlessness, gang violence, and drugs, among other challenges. His recent autobiography, Against All Odds, expresses how his circumstances didn’t defeat him and gives thanks to God’s saving grace.

Music is just one facet Tyler is engaged in. He also is a philanthropist and addresses the current events and human rights issues, like the Sandy Hook shooting, the Ferguson riots, and the Micheal Brown incident,  on several media outlets.

In an interview with the Christian Broadcasting Network, January 30, 2013, Thi’sl argued that gun control is not the solution to our violence problem, and argues that stricter gun laws won’t stop criminals from getting guns. His interview was a response to the growing debate after the tragic events of the Sandy Hook Elementary shooting on December 14, 2012 in Newtown, Conn.

This’l was again interviewed by the Christian Broadcasting Network,  September 8, 2014, after the riots in Ferguson, Missouri in response to the shooting of 18 year old Michael Brown by a Police Officer on August 9, 2014. “I never saw nothing like that before in my life.” He continues by saying he believes in “peaceful protesting” but does not support looting and rioting as a means of justice, but he understands why the city erupted in anger. “It was a situation that was bound to happen.”

In the Christian Post, August 12, 2014, Tyler stated “You’re dealing with a group of people that aren’t afraid of anything because the environment we grew up in, guns are not abnormal.” To support his efforts to create a peaceful solution, Tyler hosted a town meeting to stir up a dialog with his community about the issues.

Ironically, Tyler has been a victim of a robbery, and was attacked by a gun. Olivia McClinton is asking for your help for his financial needs for medical expenses and personal bills. Although Tyler has health insurance, it will not cover all the treatment he has had, nor will it pay for the rehabilitation he will need to learn to walk again. One of the issues Thi’sl faces is what comes after stabilization – he will need prolonged and expensive rehabilitation after his immediate injuries are dealt with.

To support Tyler, McClinton set up a GoFundMe account to raise the money to offset the cost. She comments on the page “it seems…hospitals today are less and less willing to cover out of their own funds, and no law requires that they do so, as far as I am aware.” She concludes with a optimism in the provision, “In all things, we have the reassurance that God is faithful.”

“As for you, you meant evil against me, but God meant it for good, to bring it about that many people should be kept alive, as they are today.” Genesis 50:20